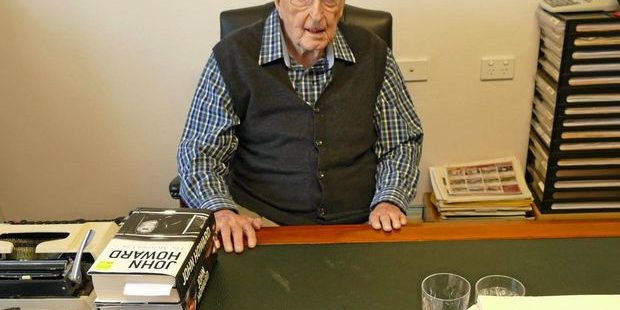 Federal Member for Page Kevin Hogan and State Member for Clarence Chris Gulaptis today paid tribute to the Honourable Ian Robinson, the former member for Cowper and Page who passed away on Thursday.

“Ian represented the community for 37 years with distinction – a community that he loved,” Mr Hogan said.

“In many ways he was a mentor and I thank him for his encouragement, advice and support over the years.

“My thoughts and prayers are with his wife Florence, his family and his many friends.”

Mr Gulaptis said he was saddened to hear of Mr Robinson’s passing.

“I’m very saddened to hear about the passing of National Party stalwart The Hon Ian Robinson,” he said.

“Ian was true blue all his life. He was born in Coraki in 1925 and after a distinguished political career spanning 37 years (10 years in the NSW State Parliament and 27 years in the Commonwealth Parliament), he never stopped fighting for country people right through his failing health.

“He will be sorely missed by a community he loved and I will miss his support and sound counsel. I send my sincere condolences to his wife, Florence.

Mr Robinson was born in Coraki and was a dairy farmer, journalist and company director before he was elected to the NSW Parliament as the Country Party member for Casino in 1953.

He represented Casino until he retired in 1963 to contest the Federal seat of Cowper. Mr Robinson served as Assistant Minister assisting the Postmaster-General from August 1971 to 1972.

He held Cowper until 1984, when he transferred to the new seat of Page. He was the Member for Page until 1990.