Three projects to mark the Centenary of Anzac in Ballina 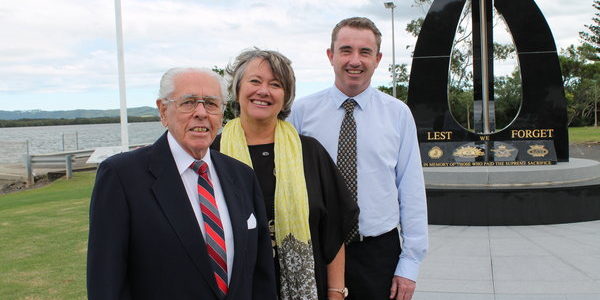 The horses quickly became legendary on the Turkish battlefield and are credited with saving the lives of many Australian servicemen.

To mark the Anzac Centenary, the Federal Government has funded an $8000 project to create a tree-line commemorate avenue in Ballina to be known as “Walers Way”.

Of the 160,000 Walers – many of whom were involved in the Battle of Beersheba by 4th and 12th Regiment to take the towns and water wells so desperately in the desert –  only one is said to have returned.

The idea for Walers Way came from two community members and was backed by Ballina Councillor Susan Meehan.

“I would like to thank the Ballina community for coming up with this wonderful idea to mark the Centenary of Anzac,” Mr Hogan said.

Walers Way was one of three Anzac Centenary grants announced today by the Federal member for Page Kevin Hogan.

Mr Hogan also announced a $5438 grant to the Ballina RSL sub-branch for two purpose-built cases to display a large amount of WW1 memorabilia and artefacts from local families whose ancestors fought during the war and other major conflicts.

He also announced a $1600 grant to the Ballina Naval and Maritime Museum for cabinets to display a number of historic engagements by the Royal Australian Navy during WWI, including HMAS Australia capturing German territories in the South Pacific, HMAS Sydney sinking the Emden, the role of our navy during the Gallipoli campaign and the Submarine HMAS AE2 entering the Dardanelles prior to Gallipoli.

“The Anzac Centenary Local Grants Programme enables our communities to support commemorations at the local level by giving them the opportunity to secure funding for projects that preserve the stories of our local servicemen and women for generations to come,” he said.

“These grants will complement the wider series of commemorative activities that have been developed throughout the Northern Rivers.

“I would like to thank the members of the Electorate Committee who have assisted me in developing an approach for commemorating the Anzac Centenary in Northern Rivers. Their hard work has made these activities a reality.”

The Centenary of Anzac will mark a century of service and sacrifice, encompassing all wars, conflicts and peacekeeping operations in which Australians have been involved.  It will be the most significant period of commemoration in our nation’s history.