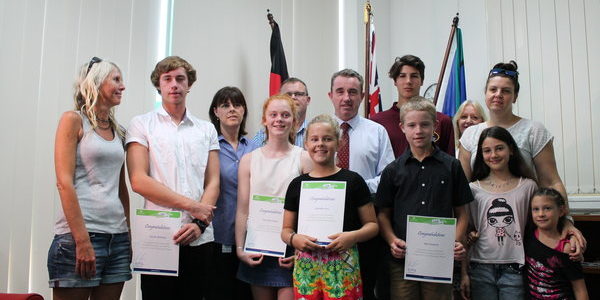 Will Goonellabah’s Gabrielle Venn be the next Laura Geitz? And will we soon be watching Max Simpkins on Centre Court at the Australian Open?

Only time will tell, but Federal member of Page Kevin Hogan is making sure these local sporting champions are given every opportunity to follow their dreams.

At a Local Sporting Champions morning tea on Wednesday, Mr Hogan will present ten local teenagers with a $500 cheque to help them on their way.

The Local Sporting Champions program provides financial assistance to young people aged between 12 and 18 years to compete, coach or umpire in their chosen sport at a state, national and international level.

“Page has produced some outstanding sportspeople in the past, and it is important that we support the next crop of our local sporting talent,” Mr Hogan said.

Mr Hogan said there was one more round of Local Sporting Champion Grants this financial year.

“I encourage any budding champions out there who have the opportunity of competing at a state, national or international event to apply for a grant by contacting my office or checking out the website ausport.gov.au,” Mr Hogan said.

In no particular order, the newest inductees into the Page Young Sporting Champs Hall of Fame are:

For more information about the program, go to www.ausport.gov.au/participating/schools_and_juniors/local_sporting_champions