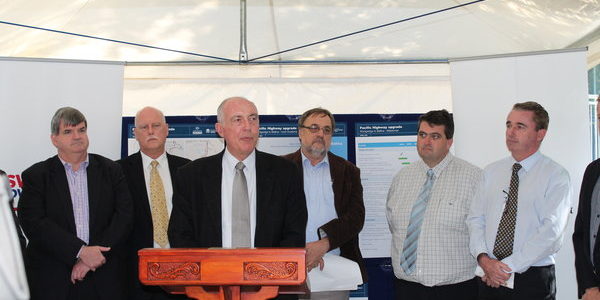 IN an Australian first, Pacific Complete (Laing O’Rourke and Parsons Brinckerhoff) has been chosen as the preferred delivery partner for the 155 kilometre Ballina to Woolgoolga section of the Pacific Highway upgrade – the final stretch in the full duplication of the highway from Hexham to the Queensland border.

Acting Prime Minister and Minister for Infrastructure and Regional Development Warren Truss said this is the first time the Delivery Partner Model had been used for a major Australian infrastructure project.

“Using a delivery partner is globally recognised as an innovative and effective way to get the best results for major infrastructure projects and has been used on large-scale projects such as the 2012 London Olympic Games,” Mr Truss said.

“The model has been tailored to meet specific needs of the Ballina to Woolgoolga section of highway, combining the knowledge and expertise of government in areas such as engineering and planning with that of the private industry.

“Expressions of interest were sought last year, with three major consortia shortlisted for the final stages of the competitive process.

“Pacific Complete has been chosen as the preferred delivery partner for their design, building and management expertise, and will oversee the 155km upgrade.”

NSW Minister for Roads, Maritime and Freight Duncan Gay said the NSW Government was ahead of the game when it came to the Pacific Highway upgrade; it was getting on with the job, and was delivering results.

“Since 2011, over $3.4 billion has been invested into Pacific Highway upgrades, resulting in a series of major construction milestones such as the opening last year of the 25 kilometre Sapphire to Woolgoolga section of highway,” Mr Gay said.

“The work that we are doing is crucial not only to helping save lives, but to creating jobs and better regional economies.

“This delivery partner model is a new way of doing business for us as well as the industry and I’d like to thank the shortlisted consortia Pacific Complete (Laing O’Rourke and Parsons Brinckerhoff), Jacobs Fulton Hogan Joint Venture and PacWay consortia (Advisian, Aurecon, Mace and Seymour Whyte) for working with us to get the best possible outcome.”

Federal Member for Page Kevin Hogan said the delivery partner was expected to employ over 200 people and would establish their main office in Grafton, delivering great benefits to the local economy.

“During construction peak, 4000 people will work directly on this project, with a further 12,000 working indirectly on the upgrade. Major construction materials suppliers all the way down to local businesses will enjoy the flow-on benefits of construction,” Mr Hogan said.

Federal Members for Cowper Luke Hartsuyker said that having a delivery partner on board would ensure the upgrade was completed on time.

“With the Ballina to Woolgoolga upgrade coming to fruition under the Coalition Government, we are delivering on our promise to build a four-lane divided Pacific Highway all the way from Hexham, near Newcastle, to the Queensland border by the end of the decade,” Mr Hartsuyker said.

NSW Parliamentary Secretary for the North Coast Chris Gulaptis said that preliminary works had started between Ballina and Woolgoolga.

“Roads and Maritime Services have done an exemplary job in getting this project ready for the preferred delivery partner to take over, and have really steered the project in the right direction,” Mr Gulaptis said.

“Our partnership with Pacific Complete will mean we can combine private industry expertise with the engineering knowledge within Roads and Maritime Services to innovatively reduce costs while delivering the best projects.”

The Australian and NSW Governments have agreed to fund the construction of the Ballina to Woolgoolga upgrade on an 80:20 funding split.