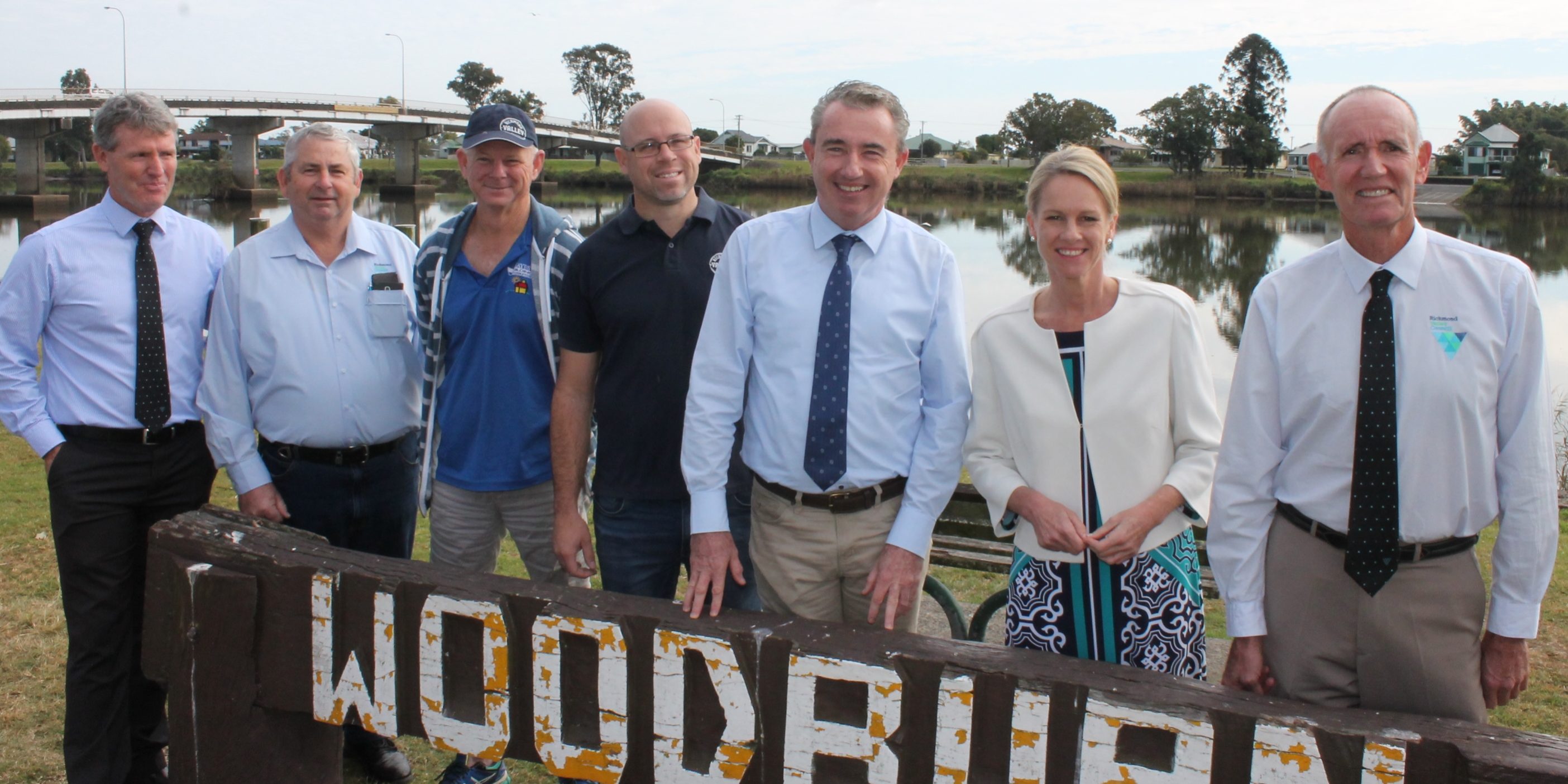 Federal Member for Page Kevin Hogan said a modern foreshore precinct in Woodburn is set to become a reality with funding secured under the first round of the Australian Government’s new Building Better Regions Fund (BBRF).

Making the announcement in Woodburn today Mr Hogan with Minister for Regional Development Fiona Nash said the new function centre, jetty and pontoon will allow for the expansion of river based sporting and recreational opportunities, including new regional, state and higher level water skiing competitions.

“The new function centre will provide a modern space where community groups and individuals can gather to celebrate a family occasion or simply enjoy the view of the on-water events from the open-style terrace,” Mr Hogan said.

“The new centre will also include a Visitor Information Centre, a new timber jetty area/stage and connecting pontoon.”

“Three existing that block the view between the main street and the river will also be demolished.”

“In what is a major boost for the regional economy, this project will create 5 jobs during construction and another 58 ongoing jobs of which three will be identified as indigenous jobs.”

Minister Nash said the Woodburn Riverside Precinct project will transform the town’s foreshore into a major tourist attraction and gateway to the Northern Rivers region.

“The revitalised foreshore will generate tourism and draw locals and visitors to Woodburn for years to come, while delivering in the short term through the creation of a significant number of local jobs,” Minister Nash said.

“I congratulate the Woodburn community on their successful application.

“I aim to help build the kinds of regional communities our children and grandchildren either want to stay in or come back to, and providing essential community infrastructure does just that.”

“As the gateway to the Northern Rivers and the Richmond Valley, the Pacific Highway bypass is a distinct opportunity to reorientate the town as a healthy vibrant community centred on the Richmond River,” he said.

“The river provides the opportunity for a range of healthy sporting and recreation activities, whilst the bypass implementation removes the unattractive heavy traffic which currently divides the main retail strip from the Riverside Park and river itself.

“I would like to thank Kevin Hogan and the Federal Government for investing in this signature project, which will ensure our by-passed towns and villages continue to grow and prosper. The Government’s $700,000 will combine with Council’s $700,000 to deliver an exceptional community precinct.”

Richmond Valley Council’s General Manager Vaughan Macdonald said the precinct would be an economic boon for the entire Richmond Valley.

“The Woodburn Riverside Project will be a great boost for economic benefit in the Richmond Valley, increasing opportunities for tourism and business,” he said.

“Woodburn will be able to host various higher-level sports, arts and cultural events, which will act as catalysts for much greater levels of tourism opportunity over the longer term. The new facilities will help create regular retail activity, as well as growing associated tourism industries throughout the area, including at nearby towns such as Broadwater, Coraki and Evans Head.”

More information about the Building Better Regions Fund is available at: business.gov.au/bbrf