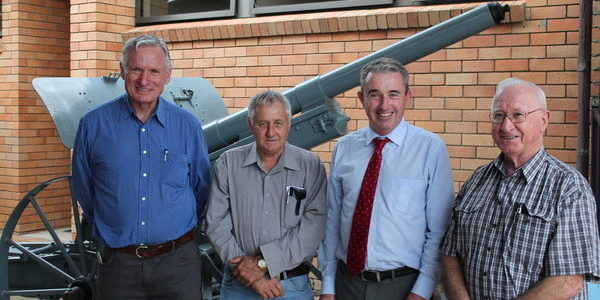 Mr HOGAN (Page) (11:20): I want to pick up on a line that the member for Riverina just mentioned in his address to parliament, which for me goes to the essence of what the Veterans’ Affairs Legislation Amendment (Mental Health and Other Measures) Bill 2014 is about. This bill is about making sure that we care for our service men and women not only when they are wearing a uniform but also when they are not. That, for me, is the essence of what this bill is about.

It has been mentioned that a big part of this bill is to improve the access of our service men and women—both current and former members of the Australian Defence Force and their families—to mental health services. This is one of the four pillars of our plan for veterans that we took to the last election. From July, access to treatment under non-liability healthcare arrangements will be expanded to include diagnosed conditions of alcohol and drug use disorder regardless of whether people think that condition was service related. Changes contained in this bill also mean that all those with at least three years continuous full-time peacetime service will now also be eligible for non-liability health care. It is very well documented now, and a lot of research has been done into post-traumatic stress disorder, anxiety and depressive disorders and alcohol and substance use disorders.

I want to digress just quickly. This legislation is obviously going to have more effect and be of more import to our recent vets, our young vets. There are probably a couple of hundred young vets who live in my community, but there are also older vets. Probably a year or so ago, I was at a Vietnam veterans dinner, acknowledging the contribution they made to our society all those years ago. I was sitting on a table with four Vietnam vets and their wives. I had known most of these guys for decades but had never really sat down with them and spoken about their stories in relation to their service in Vietnam. We know about these stories, we know they are real, but it was quite humbling to hear them. Obviously, these were guys older than me that I had known from around our community. They were contributors to our community; they were good people in our community. Not by design but just by coincidence they all told me their stories—what happened to them in Vietnam.

These were their stories. One of them I knew had a bit of a gammy arm. He had come home from Vietnam but he had been shot in the arm. Obviously, that meant he was disabled in that arm for the rest of his life. He had had a very successful football career. Even without the full use of his arm, he had been a successful businessman in our community. He had suffered a lot physically from this wound, but a lot of people in the community would not have been aware of that.

The next veteran I spoke to at the table—again, he just started talking about his time in Vietnam—was again a guy I had known a long time. He was alive solely by luck. He was in a jeep that got blown up. No-one else in the jeep lived. The only reason he lived was that he was thrown so far into the air. The shrapnel and everything flying around killed everybody else, but he lived because by the time he came back down and hit the ground it had all dissipated. He had been deeply affected by this.

The third guy I spoke to that night told me—and you could tell he was still struggling very much with this experience in many ways—he had gone into the jungle with 19 of his fellow servicemen. Two days later, only six of them came out. The rest did not come out, and he was still very deeply affected by that. The fourth vet on that table had also returned from Vietnam with a serious physical wound. Maybe it was because it was a dinner honouring them and their fellow soldiers who served in that war, but all of them were very happy and very emotional sharing those stories, and it was very emotional to hear them.

We have got better at this, but we know that when they came back from Vietnam we did not do a lot to help them. Since then, we have done a lot of good work in diagnosing the conditions that they come back with. It was interesting that all of these guys said they had to be active to maintain their health of mind as best they could. One of them would get in a kayak every morning and just paddle. He said he had to keep moving. Another said that he just was not coping that well when he first got back. They had a young family. They got in a caravan and they just started driving. They all had this physical need to move. They all had their own ways of trying to cope with their experience. The effect that such experiences had on those men was very real, and it was a privilege that they shared their stories with me.

The bill before us also means that members who discharge before completing their three years continuous full-time service may also be eligible for non-liability health care, where discharge is on the grounds of invalidity or physical and mental capacity to perform duties. This means treatment for mental health conditions such as PTSD, anxiety and depressive disorders, and substance abuse will be available without the need for these conditions to be accepted as related to the member’s service. Again, that is very important.

PTSD affects around one million Australians in any year, and 12 per cent of Australians will experience PTSD in their lifetime. Anyone can develop PTSD following a dramatic event. As I said, our medical and mental health professionals are much better at diagnosing and treating this. Obviously, it is not hard to work out that people who experience active service are more at risk of PTSD. They are trained to be at war. There can be a lot of triggers for PTSD; it can be a noise, it can be a sound, it can be a smell. A lot of things will trigger in them an anxiety response. After asking our men and women to serve their nation in theatres of war like Iraq and Afghanistan, we owe it to them to provide the support needed to beat this disorder.

Unfortunately, PTSD has already taken too many of the lives of our service people. It is a very sad fact that the ADF has lost more than 60 members to suicide since 2003—about half the number of deaths of members on the front lines of Afghanistan over the same period. These deaths are not mere statistics. They were men and women who served our nation well. They were fathers, mothers, sons, daughters, brothers and sisters. And, while they are not counted as such, they are in effect casualties of war.

This was the very unfortunate experience of a well-known family in our community, the Wood family, from the Coraki-Casino district. Last May, I attended the funeral of David Wood, who had done two tours of Afghanistan and suffered from depression afterwards. Again, the great tragedy of this is that no-one really knew how depressed he was. His family, a good family, did not realise how depressed he was. He left his family home in Casino one morning and, after searches, his body was found close to his home two weeks later. The whole community was grief stricken by that event.

I have a good friend whose son went to Afghanistan. Her line is: ‘I sent them my brave young man and they have given me back a wounded soul.’ She is always on the lookout for him and watches him closely. We as a nation must do whatever we can to help our young men and women who return from front lines with these mental health disorders.

This bill also recognises that peacetime service has its own risks in relation to the exposure to traumatic events and the impact on mental health. It extends the eligibility for counselling through the Veterans and Veterans Families Counselling Service to include, among others, members who serve in border protection, disaster zones and those involved in training accidents. Counselling—and I think this is a really important element of it too—is extended to partners and dependent children of these newly eligible groups, as well as the partners, dependent children and parents of service members who are killed in service-related incidents. We know that when these people return to their families and to their homes, they are not same people that left and this can affect the immediate family and, indeed, the extended family.

Another significant measure in the bill will enhance the operations of the Veterans’ Review Board, also known as the VRB. The VRB provides merit reviews of decisions relating to disability and war widow pensions, compensation and other entitlements under the Veterans’ Entitlements Act and the Military Rehabilitation and Compensation Act. The bill will introduce a legislative framework for alternative dispute resolution processes including conferencing and mediation. Additional improvements relating to case management and the administrative and procedural practices of the board are expected to enable more effective management of the functions of the board.

Some might view the changes in this bill as ‘legalising’ the board or turning the board into a replica of the Administration Appeals Tribunal. This is not the case. These changes are designed to give the board more modern and efficient processes. They will enable the board to apply alternative dispute resolution mechanisms to resolve matters more quickly and satisfactorily so as to prevent the need for hearings in many cases. There was extensive consultation with ex-service organisations in 2013 on these matters and there is broad support for these reforms. I know that many of the RSL groups and sub-branches and veterans in my community gave great input to this and I thank them for that.

When we are talking about budgets, I think that it is very important to acknowledge with this bill and obviously with the indexation of the DFRDB, that there is a lot of government money going out into the community. It was mentioned by the previous speaker, the member for Riverina, that this government, or any government, of Australia cannot do too much to support our veterans. These people—and I have given you some examples earlier—have paid service to this country like no other person has. They have literally put their life on the line. They have very often been physically wounded and, unfortunately at worst, been mentally disturbed by the service that they have given our country. So when they come back, any government—and I am very proud to include this government—cannot do too much for them. This bill with the adjustments and amendments that it is making to the provision of mental health services and for fair indexation and the other measures that I have mentioned, I commend to the House. I think that this is a very important part of what we are doing in this chamber to legislate to improve the health, physical and mental, of our veterans. Thank you.