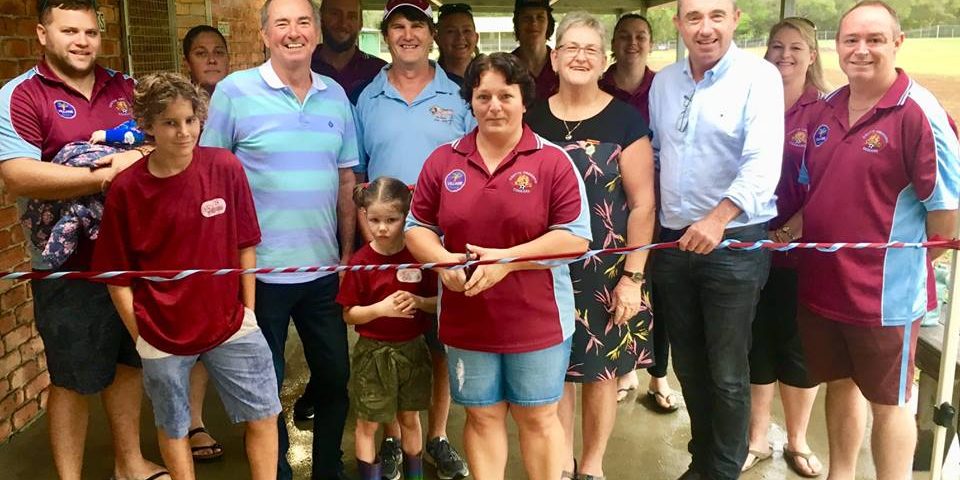 Mr Hogan was joined at the opening by the Member for Clarence Chris Gulaptis.

“This upgrade will provide two change rooms, a referee room, a disabled toilet and storage for the club.”

Mr Gulaptis said everybody benefits when the community works in partnership with government on behalf of residents.

“This is about delivering the social infrastructure I am so passionate about,” he said.

“Both Kevin Hogan and I want to make sure locals have the best possible infrastructure and services, and these much needed improvements at Wajard Park are a terrific example of that.”

Club President Dave Towns thanked Kevin Hogan and Chris Gulaptis for the support and funding towards this project.

“We are a small club that has achieved great things and now boast a top of the range facility that will now give comfort, privacy and safety for our players, officials and supporters,” he said.

“This is a great benefit to not just the Coutts Crossing Cougars Football club and the community but to the whole football community for many years to come.

“The club would like to also thank all the tradespeople who worked on this project and to some of our local businesses for their assistance and support to get this facility finished.

“Clarence Valley Council has also been so supportive with this and have contributed and helped all the way to make the upgrades to this building and our fields – something we are very proud to unveil for the 2019 season.

Clarence Valley Mayor Jim Simmons said credit for the new Clubhouse should go to the Cougars Soccer Club and the Coutts Crossing community.

“This project is a perfect example of the way people in small communities can work together to provide community facilities,” he said.

“They received support from different levels of Government, including a total of $37,500 from council, but it is the people who put in the many hours of voluntary work and fundraising who really deserve the credit.”

The Federal Government contributed $10,000 to the project and the State Government $15,000.