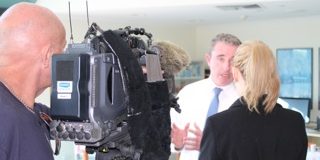 Federal member for Page Kevin Hogan said the Federal Government’s efforts to speed up the NBN rollout are paying off for residents in Homeleigh and surrounds as work begins to connect hundreds of premises to the National Broadband Network.

It is expected that broadband and phone services will be able to be connected over the National Broadband Network (NBN) from phone companies and internet providers within 12 months.

Since the election, the nationwide number of active broadband connections on the NBN has more than doubled.

“The rollout is happening faster than ever since the Coalition Government took office and trials have started to test other technologies which will dramatically lower the cost and time it will take to deliver fast broadband to all Australians,” Mr Hogan said.

The Government’s changes to the NBN rollout will save $32 billion, will see upgrades delivered four years sooner than under the previous government and avoid Internet retail bills increasing by up to $43 a month.

Suburbs and towns with the worst broadband service will get priority under NBN Co’s new rollout strategy.

Detailed maps showing the areas around Homeleigh where construction has begun are available at www.nbnco.com.au/rollout/rollout-map.