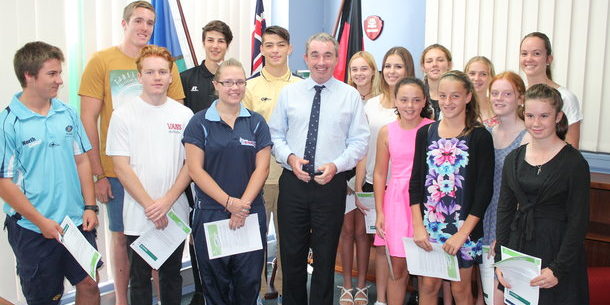 Will 17-year-old Isack Rodda be the next John Eels, and will 14-year-old Tayla Fawcett reach the netballing heights of Liz Ellis?

They are among the 35 young people from across Page who were recognised by Federal member for Page Kevin Hogan with a Local Sporting Champions Award on Monday and Tuesday.

“We don’t know how far these young people will go in their chosen sport, but it’s up to us as a community to give them as much support as we can so they can to follow their dreams,” Mr Hogan said.

At special morning teas held in Grafton on Monday and Lismore the following day, each Champion were presented with an Award and $500 to help them on their way.

The Local Sporting Champion Awards provides financial assistance to young people aged between 12 and 18 years to compete, coach and umpire in their chosen sport at a state, national and international level.

“Page has produced some outstanding sportspeople in the past, and it is important that we support our next crop of young sporting talent,” Mr Hogan said.

“This is the second time I have presented these awards and it shows the deep pool of talent we have here.”

“The Champions have all performed on the state or national stage, but unfortunately this means their parents have had to put their hands in the pockets to get their children to the competitions. I’m very pleased to be able to help these families with financial support through these grants.

“I have always believed that sport plays an important role in the development of young people. It teaches them life-long skills like leadership and teamwork, and of course it keeps them healthy and fit as they excel in something they love.”