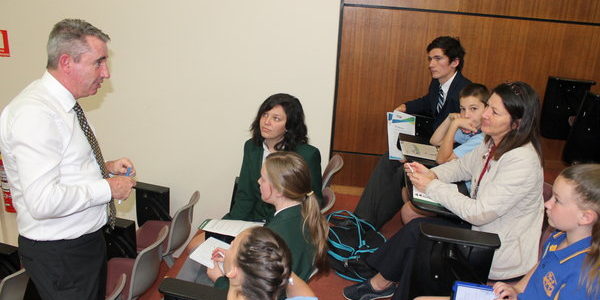 Student leaders from across Page had a chance last week to have their voices heard at the G20 meeting of world leaders to be held in Brisbane later this year when they gather on Tuesday for the inaugural Page Youth Leadership Forum organised by the Federal Member for Page Kevin Hogan.

More than 80 students attended the Forum at Southern Cross University where they presented their views about what matters to regional youth to two delegates who will be attending the Y20 summit – one of five official engagement groups of the G20.

“The role of the Y20 is to provide a range of recommendations to the G20 on issues that are of importance to youth,” Mr Hogan said.

“I asked delegate Jonathan Pavetto to come to Lismore and hear the views of our students at the Page Leadership Forum.”

“I felt it was particularly important to be able to canvass issues from a rural and regional perspective with our Y20 delegates.”

Students were invited from all schools across Page to attend the forum, with students turning up from Woodenbong in north to South Grafton in the south, and Kyogle in the west to Ballina in the east.

The Y20 will be held in mid-July in Sydney prior to the G20 meeting that Australia is hosting in Brisbane in November. The G20 will be the most significant meeting of world leaders Australia has hosted.

The Group of Twenty (G20) is the premier forum for its members’ international economic cooperation and decision-making. Its membership comprises 19 countries plus the European Union. G20 leaders meet annually.

The G20 started in 1999 as a meeting of Finance Ministers and Central Bank Governors in the aftermath of the Asian financial crisis. In 2008, the first G20 Leaders Summit was held, and the group played a key role in responding to the global financial crisis. Its decisive and coordinated actions boosted consumer and business confidence and supported the first stages of economic recovery. G20 leaders have met eight times since 2008.

The G20 continues to focus on measures to support global economic growth, with a strong emphasis on promoting job creation and open trade. Each G20 president invites a number of guest countries each year.