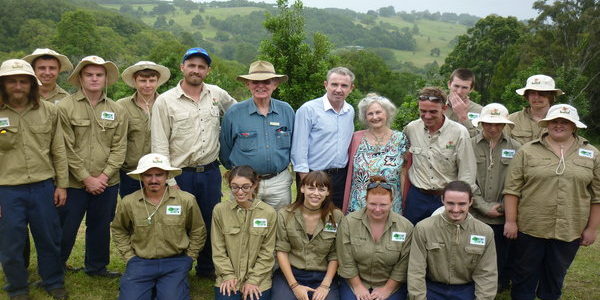 Federal member for Page Kevin Hogan said the third round of Green Army projects is set to roll out across the Northern Rivers over the next year with two more projects announced for  Ballina today.

“Young people in the Northern Rivers who are interested in being a part of one of the Australian Government’s major environmental initiatives and in helping our community deliver important local conservation outcomes now have the opportunity to join the Green Army.”

Green Army projects to be underway in the coming months in the Northern Rivers include:

One of the many Green Army launches.

“The Green Army provides opportunities for young Australians aged 17 to 24 years to gain skills, training and experience in environmental and conservation fields, while participating in projects that generate real benefits for the Australian environment.”

“Soon our local communities will see Green Army teams deployed to projects in their area for up to six months at a time.

Young people interested in joining the Green Army can apply through the appointed service providers for each state and territory. Contact details for service providers are available from www.environment.gov.au/land/green-army/service-providers

The Green Army is a hands-on, practical environmental action programme that supports local environment and heritage conservation projects across Australia.

Further information on the programme is available at: www.environment.gov.au/green-army