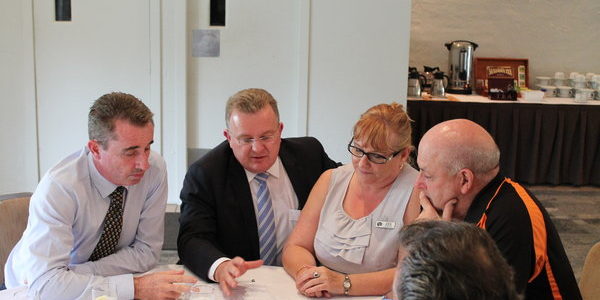 Federal member for Page Kevin Hogan said he and the Federal Government were working with small businesses in the Northern Rivers to create jobs and drive the local economy.

“There are more than 10,000 small businesses in Page which are a crucial part of our economy and a major local employer,” Mr Hogan said.

“I invited Minister Billson to the Northern Rivers because it is important for our business owners and leaders to discuss with him the unique challenges faced by regional businesses.”

“Since coming to office, the Government have had three Red Tape Repeal days when tens of thousands of unnecessary and costing pieces of regulations were scrapped, freeing our local businesses to do what they do best – create jobs and generate income for our economy.”

In its first budget, the Government also increased the funding for the duplication of the Pacific Highway to $5.6 billion and will shortly announce the successful tender for the Ballina to Woolgoolga section of the highway.

Work on this section of the highway will create 4300 direct jobs during construction and another 12,900 indirect jobs.

A report by the NSW Roads and Maritime Services predicts that businesses such as retail, accommodation, cafes/restaurants, and property and businesses services would reap a “significant” economic benefit during construction, particularly in West Ballina and New Italy.

“Both the Government and I are focused on jobs. We have rolled out Work for the Dole and Green Army programmes across the Northern Rivers which are proving to be very popular among people looking for work,” Mr Hogan said.

“The Northern Rivers has one of the highest numbers of Green Army projects in Australia, and in just over 12 months more than 190 people have participated in Work for the Dole programmes.

“The popularity of these two programmes shows that young people see the benefits of being trained to be ‘job ready’ so they stand out from other applicants when competing for that dream job.”