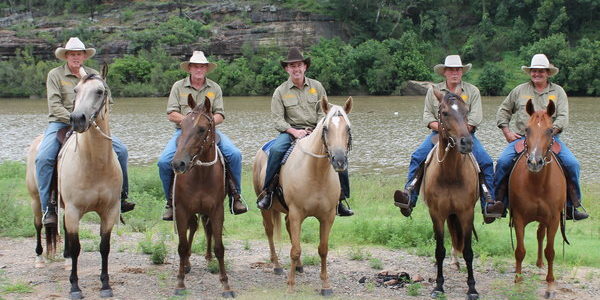 When the call went out for volunteers to fight in World War I, men from the upper reaches of the Clarence Valley answered the nation’s call, riding their horses across rivers and through bush to sign up at the Copmanhurst Hotel before riding on to Grafton and heading off to battle.

Federal member for Page Kevin Hogan recently announced an Anzac Centenary grant to the Grafton RSL sub-branch of $10,000 for a week long commemoration in Grafton and South Grafton including the re-enactment of the famous Lighthorse recruitment drive, a Mayoral Ball, street banners, and two Dawn Services.

The ride has become legend, and to mark the historic event 100 years ago, up to 100 horses and riders will this year re-enact the patriotic ride in the lead up to the Anzac Centenary.

Mr Hogan today joined some of the riders from Copmanhurst to Grafton as he inspected the preparations of the Copmanhurst Lighthorse Re-enactment Committee.

“I’m proud to say I organised Federal Government funding for this year’s re-enactment,” he said. “The spirit of those riders, was the spirit of the Anzac.”

“The ride has become legend and those young men who went on to fight so valiantly did their community and their nation proud.”

Other organisation in the Clarence to receive Federal funding so far are Coutts Crossing ($2312) to create a World War I honour roll, Tullymorgan School ($5,758) install an honour roll and Chambigne District Social Club ($2239) for the restoration of its honour board.