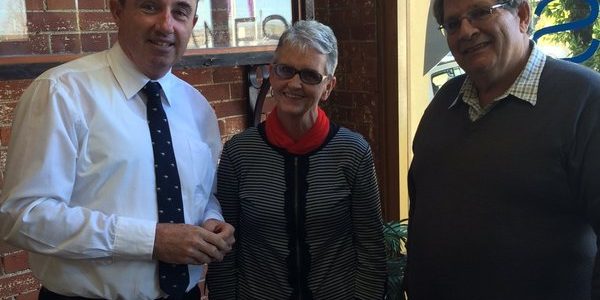 In addition, Mr Hogan has secured a $538,000 grant to provide 8200 hours of respite care under the National Respite Carers Programme (NRCP).

“Crane is a terrific organisation and I am proud to have lobbied for funding for both of these programs,” he said.

“Continued funding for FRSP means Cranes can continue to offer programs to help build the resilience of families to respond to life’s challenges by strengthening the relationships within families and improving the well-being of children.”

The main Parenting courses will be presented in each school term include Confident Parenting,  Understanding Your Child’s Brain,  Responding not Reacting  and Standing Strong.

Mr Begg said Cranes has also trialed a new program developed by The Early Childhood Foundation ‘ Bringing up Great Kids’ which was runs over six weeks and is a reflective program aimed at promoting positive and respectful parent/ child relationships.

“This program was very well received and will now be offered each term,” he said.

Mr Hogan said funding for the Carers programme will provide much needed ‘time-out’ for carers in Clarence Valley, Kyogle and Richmond Valley.

“It is important that we care for the carers,” he said. “They carry a heavy emotional and physical load looking after their loved ones. As a society, and as a government, we must give them support and respite.”