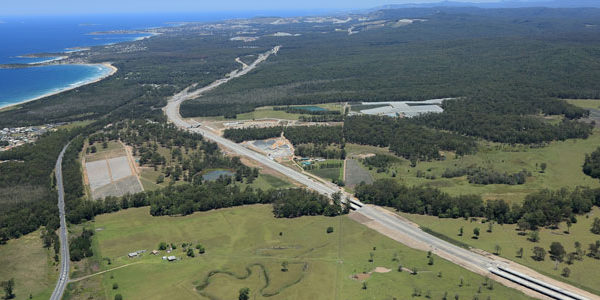 Lendlease Engineering Pty Ltd has been awarded the contract to deliver concrete paving on a 12.7 kilometre dual carriage way section of the Pacific Highway upgrade between Richmond River and Coolgardie Road at Coolgardie.

Federal Member for Page Kevin Hogan said this is a big step towards the completion of the Pacific Highway upgrade, a 23 year upgrade program with an investment of $15 billion funded by the Australian and NSW Governments.

“This contract is in addition to major work contracts awarded last year which included pavement work for sections of the upgrade between Maclean and Broadwater, and between Coolgardie Road and the Ballina bypass,” he said.

State Member for Clarence Chris Gulaptis said Roads and Maritime Services will award a final concrete pavement contract for work between Glenugie and Maclean in the coming weeks.

“This will be the last significant contract to be awarded for the Woolgoolga to Ballina upgrade,” he said.

“Paving is the last major construction activity before the road can open to traffic. The project team will be paving 125 kilometres of dual carriageway to complete the Woolgoolga to Ballina upgrade with work expected to start in spring.”

Roads and Maritime has a master supply agreement with local quarries to supply aggregates, including sand and rock that are used to make concrete. These aggregates are supplied directly to the paving contractor who then makes the concrete at batch plants on site.

Parliamentary Secretary for Northern NSW Ben Franklin said Lendlease Engineering Pty Ltd is also delivering the main civil work for 17.5 kilometres of the upgrade between Broadwater and Pimlico and the design and construct contract for the new bridge over the Richmond River at Broadwater.

“The Pacific Highway upgrade is Australia’s largest regional infrastructure project. The 155 kilometre Woolgoolga to Ballina section will complete the highway upgrade to two lanes in each direction between Hexham and the Queensland border,” he said.

When completed in 2020, the highway will deliver a safer link in the national road network with reduced travel times and improved transport efficiency.