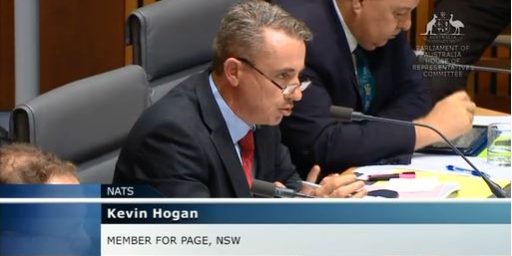 Federal Member for Page Kevin Hogan will cross-examine the heads of the country’s four Big Banks over the next three days as part of his role on Parliament’s Economics Committee.

It will be the first time that the chief executives of the four Big Banks have been called before the powerful Economics Committee.

“This is a very important change to the oversight function of the banking system by the Economics Committee,” Mr Hogan said, adding that the CEOs will now appear before the committee every year.

Mr Hogan said he would be asking questions about the potential misuse of the Big Bank’s market power and whether bank staff received extra payments and incentives to sell bank products rather than provide customers with sound independent financial service.

He said he was concerned about the implications for people living in rural and regional areas if financial advice was not independent.

The Commonwealth Bank’s chief executive Ian Narev will appear before the Economics Committee for three hours today, followed by the ANZ’s Shayne Elliott tomorrow and, Andrew Thorburn from the National Australia Bank and Brian Hartzer from Westpac on Thursday.

Mr Hogan said he expected a broad range of questions from the ten members of the committee.

“These three-days of intensive hearings is about ensuring greater transparency in our banking system, and from my perspective, ensuring that the needs of bank customers in regional Australia are not ignored,” he said.