Budget invests in the future of Page 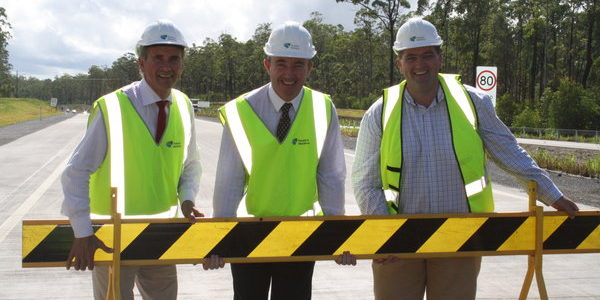 Federal member Kevin Hogan said Page was set to benefit from a record infrastructure investment in the Federal Budget.

He said the budget would deliver increased investments in the Pacific Highway and local roads.

“This is great news for our local economy and most importantly for jobs,” Mr Hogan said.

“This budget will ensure the continuation of the current $4 billion work schedule of the Pacific Highway. It also includes more money for local roads through additional investments in the Roads 2 Recovery and Black Spots programmes.”

As part of the government’s Economic Action Strategy, it will invest a record $50 billion in infrastructure between 2013/14 and 2018/19. This includes more than $4 billion for the Pacific Highway duplication, $2.1 billion under the Roads to Recovery programme to assist local councils to maintain and upgrade roads and $500 million to extend the Black Spot Programme to improve safety on local roads.

Mr Hogan said the government had also allocated $300 million over the next five years for the Bridges Renewal Programme to upgrade wooden bridges.

“These investments will bring job opportunities, boost our local economy and make our roads safer,” Mr Hogan said. “These projects will relieve pressure on existing infrastructure and unlock our economic capacity, making Page  an even better place to live and do business.”

He said the Budget was part of the Abbott/Truss Government’s Economic Action Strategy to build a strong, prosperous economy for a safe, secure Australia.

“The Government has made the difficult but necessary decisions to put the Budget on a more sustainable footing so that we can all share in prosperity in the future,” Mr Hogan said.

“We are all playing a part – because it’s in sharing the load that we lighten the load.”

“Labor ran up five record deficits and left $123 billion in future deficits. If we took no action, debt would have hit $667 billion. Every month, the government is paying $1 billion in interest costs on Labor’s debt.
“Governments, like households, must live within their means.”

The Budget includes:
• Australia’s biggest infrastructure programme – with $50 billion in transport investment by 2019-20;
• Creating the world’s biggest medical research endowment fund – the $20 billion Medical Research Future Fund. It will find the cures of the future and be funded by the health reforms;
• Requiring young people who can work to be earning, learning or participating in Work for the Dole;
• Providing stronger incentives to businesses to hire older workers – businesses will receive up to $10,000 for employing workers older than 50;
• Funding for additional road infrastructure by reintroducing twice-yearly indexation of fuel excise to CPI from August 2014;
• Providing Australian universities with the freedom to innovate through full deregulation;
• Reforming the Age Pension to make it more sustainable – that includes gradually increasing the Age Pension age to 70 by July 2035;
• Freezing politicians’ pay and ending the life-time gold pass;
• Changing family payments to target support to those who need it most; and
• Introducing a three-year Temporary Budget Repair Levy – payable, from July, by individuals with a taxable income above $180,000 at a rate of two per cent. The Levy will ensure those on a higher income contribute to the Budget repair.