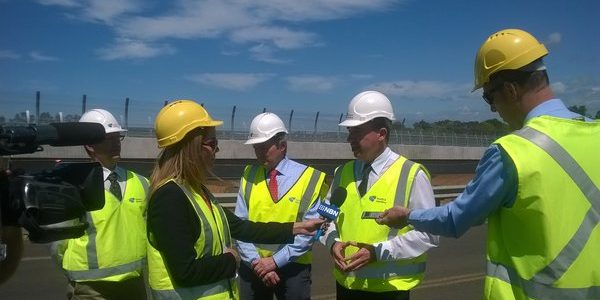 ANOTHER milestone has been reached on the Pacific Highway upgrade with the opening of the Broken Head Road overbridge, as part of the $862 million Tintenbar to Ewingsdale project.

Deputy Prime Minister and Minister for Infrastructure and Regional Development Warren Truss said the project was an example of the Australian Government’s commitment to delivering safer, more efficient roads for local, freight and commuter traffic.

“The upgrade is being completed as part of the Australian Government’s record $14.9 billion commitment to investing in New South Wales transport infrastructure, including $5.64 billion to complete the Pacific Highway by the end of the decade.”

“The opening of the overbridge marks a significant milestone for the project,” Mr Hogan said.

“The Tintenbar to Ewingsdale Pacific Highway upgrade started in September 2012 and is expected to be open to traffic late 2015.”

NSW Member for Ballina Don Page said this was Australia’s largest regional road infrastructure project and the highway would be fully duplicated by the end of the decade.

“This project will provide a strong boost for the region, with 1,200 direct and 3,800 indirect jobs being supported over the life of this project,” Mr Page said.

“The Broken Head Road overbridge opening will be warmly welcomed by local motorists as it is on a popular access road between the Pacific Highway and the coast.

“Importantly, this bridge opening means local traffic (including school buses) will be able to be separated from through traffic travelling on the new dual carriageway when it opens.”